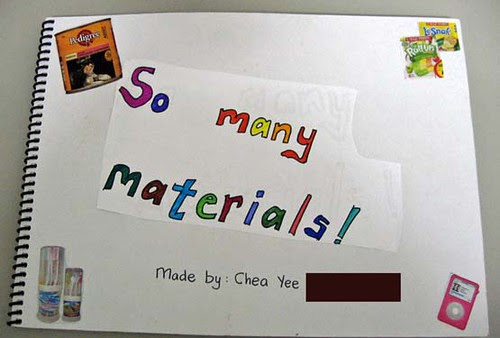 My science resource: a book I made. 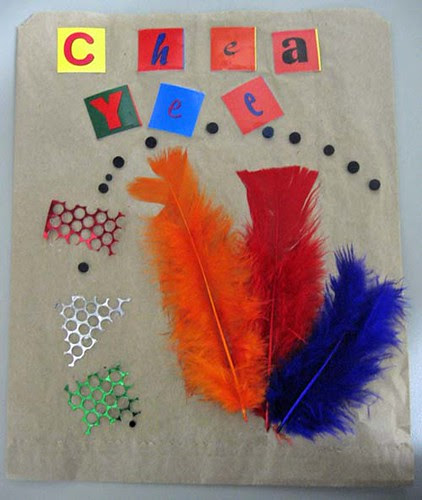 A paperbag craft I made at Play Group.

Well, if you noticed, I removed my last name from my pictures as well. As I have stated, no last names are allowed on my blogs, and even if I do mention them, it will only be their first name.

I made the paperbag craft at Play Group today, coz I realised that one of the children was watching me. She even asked the mother why was I there, and the mother told her that I was there to observe here.

When I take the turn to join in to make a craft at the table, it arouses the children's curiosity about who I am to them. Technically, it is a strategy for a stranger to come in and slowly join the children. Some of the children were quite outspoken, but most of them were rather shy, so I needed some time before they can get used to me being around them. As I made the craft, the girl kept watching me. She even gave me some of the red cuttings she had for her collage and put it in my hand as she saw me sticking collage on my paperbag. Then she ran back to the chair she was sitting.

I even played ball with one of the children, MD. He is about 2 years old, and he asked me if I wanted to play a game of "catch the ball" with him. Actually, I couldn't really catch what
he was saying, but it was clear enough for me to understand him. So I followed him out in to the pavement and he pointed to the ball.

Some mothers come in early to Play Group, as they realise their child finds it more difficult to mix with the others when everyone has arrived. However, if they come in early, their child has time to settle in with the others and greet them as they all start arriving in one by one. It's not a very uncommon strategy used by parents for their children, but also with adults themselves.

I used to use this trick when going for parties, as I do not like arriving at parties late. The rationale is that if you arrive early at a place, it allows you to move in slowly to the "mode of the place" earlier. Rather than arriving late, to a person who has just arrived, it looks like everyone else seems to belong and the former would feel like an outsider. To a child, depending on their temperament, some may not be able to handle such a situation. It really depends on the parents and how they are able to wisely handle the situation.
Posted by CheaYee at 3:02 AM

The author has worked 5 years in the Malaysian pre-school settings as teacher, supervisor & a parenting magazine contributor. She has spent the last two years studying in Queensland & was residing for a year in Sydney.

To reach me, just leave a comment. It goes straight into my mailbox.